Belonging Branding Copywriting Storytelling
Here's how a floppy, pink hat, a ton of glitter, and an unexpected comment from a coworker helped me start Courage & Grow. 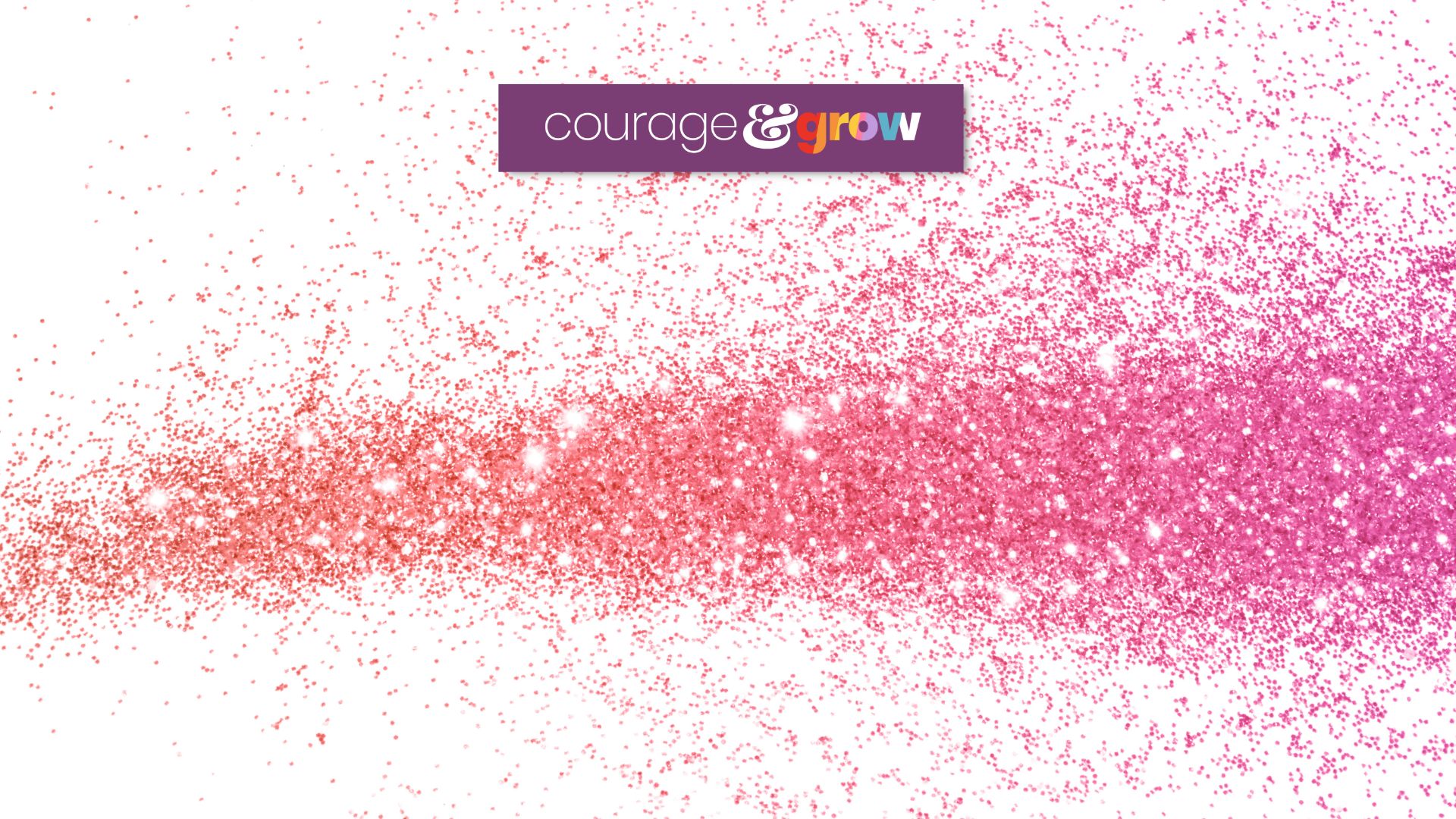 I walk up Jefferson Avenue in Detroit with a couple friends.

We’d parked the car in a structure nearby, and that’s where I got ready.

I tied a rainbow flag around my neck, and tucked another into the waistband of my shorts.

I had several Human Rights Campaign logos — the blue square with the yellow equal sign — tattooed on my face.

I put a terrible pink fisherman’s hat, covered in a dozen buttons from past pride festivals, Planned Parenthood, and even the 2008 Obama campaign, on my head.

And, most importantly, I whipped out a brand-new can of sparkly glitter hairspray that I’d just bought from Party City.

I began to spray.

Hair. Face. Chest. Torso. Legs. Feet. It was so much glitter, it could be weighed in pounds.

If ever the phrase ‘he looks like a pink nightmare’ were to apply outside of the movie A Christmas Story, it’d be here.

But, no matter how ridiculous I looked, I loved it.

I was out of the closet in many areas of my life, particularly at school and with friends.

I’d put on my Mask and slip into incognito mode not because I was ashamed of who I was, but because I was terrified of drawing attention to myself or making anyone else uncomfortable.

I still hadn’t figured out that true belonging meant being myself, not mashing parts of myself into what others wanted or expected.

But, at Pride, none of that mattered.

I could wear ridiculous things (and I did), be covered in glitter literally from head to toe (and I was), and like boys (which I did).

Nobody would bat an eye.

Except at the hat.

We step off of Jefferson Avenue and into the festival at Hart Plaza.

Motor City Pride just moved from back to Detroit after being held in Ferndale for nearly a decade, and Hart Plaza is its new home.

It’s also two-day event for the first time, so we’re there on Saturday.

It’s stupid hot. In the 90s. Way hotter than it should be at the beginning of June.

Plus, Hart Plaza is a giant slab of concrete sandwiched between Jefferson Avenue and the Detroit River, so there’s no shade whatsoever.

We walk around the event, browsing through rows of vendors, and stopping to listen to the music at a couple of stages.

After about an hour, we’re drenched in sweat.

So, I suggest we walk from Hart Plaza to the Renaissance Center, about a quarter-mile up the Detroit Riverwalk. I know that there’s a food court in the basement where we can get something to drink and cool off.

The RenCen is massive.

It’s made up of six connected towers, it’s the tallest building in Detroit, and it’s the focal point of our skyline.

But, I know it well because I work there!

I got an internship at a company called Urban Science through the co-op program at the University of Michigan-Dearborn. The world headquarters is in the RenCen.

At Urban Science, I work for the IT Operations team, and we’re responsible for helping test and deploy changes to the company’s software.

My boss is Jan.

Jan is a small, fiery, gray-haired woman in her 60s who, good or bad, never hesitates to say what’s on her mind.

In addition to her IT management job, Jan raises mules. Yes, mules.

She also bakes human cakes for her not-human dogs, loves tattoos, and and knits a lot.

To say she’s eclectic is an understatement.

As interns at Urban Science, we’re encouraged to explore beyond our own teams, and to meet folks within the company.

Because I work at world headquarters, I’ve met many of the executives, including the CEO and the CIO, the Chief Information Officer.

The CIO is the global head of my entire team, and we’d met often enough that we knew each other by our first names.

He knows me as the intern who, though it’s not required, sometimes wears suits to work, particularly on days when I have Student Government meetings in the evening.

Though, in this moment in the food court, I’m certainly not wearing a suit.

My friends and I finished cooling off and decided to head back to Pride.

We step onto the escalator that will take us from the lower level to the main floor.

A little more than halfway up, I freeze, and my mind starts to consider if it would be possible to walk back down the up escalator:

Out of the corner of my eye, I’ve spotted the CIO — my boss’ boss’ boss — about a hundred feet away, walking in my direction with several others.

I decide that turning around and walking back down isn’t actually option. It will probably call more attention to me anyway.

I’m stuck on that escalator, inching closer and closer to one of my company’s top execs, wearing two pride flags, a floppy pink hat, political buttons, tattoos, and about four pounds of glitter.

I have no idea what he’s doing here.

Plus, the RenCen is huge!

What are the chances that I’d run into any coworkers, particularly the CIO?

The escalator reaches the top and we step off.

We head toward the doors, and the CIO is right in our path.

But, he’s caught up in conversation with one of the other suits walking with him.

I think to myself, “Maybe I’ll catch a break. Maybe he won’t even notice me.“

The are lots of other people around, and he’s busy talking.

Plus, it’s Saturday. He wouldn’t expect to bump into a coworker on a Saturday.

I force my eyes in the direction of my friends and I make very intentional conversation.

If I just avoid looking at him, and we keep walking like nothing unusual is happening, he’ll certainly miss me.

Now he’s only a few feet away and about to pass me.

He’s not even looking in my direction!

I’m in the clear.

And then it happens:

I risk the tiniest glance, just to confirm that he’s behind me, and our eyes lock.

His eyes then scan me from head to toe — from floppy, pink hat to glitter-stained shoes.

A look of recognition crosses his face, he says, “Hey Anthony”, and I turn as pink as that hat.

On Monday morning, I ride the elevator up the 31 floors to our office, step off, and walk to my desk.

I’m back in my corporate attire, save for a few flecks of glitter that survived even my best attempts with a loofah, my face still pink (and not from a sunburn).

I set my bag down on my desk, which is in desk clump in a large, open space, sort of like you’d find on The Office.

Jan, my boss, is sitting at her desk already, which is right next to mine.

I say hello and we chat about the weekend.

I mention that I happened to run into the CIO on Saturday and, naturally, she’s interested in what happened.

I explain that I’d been downtown for Pride and we ran into him in the building.

I also tell her that I was wearing that pink hat, buttons, tattoos, pride flags, and about fourteen pounds of glitter.

I leave out the phrase ‘pink nightmare’.

Deflated, I tell her that I looked absurd, and now I feel stupid for dressing that way. I tell her how embarrassed I am.

I regret allowing myself to be seen.

In that moment on the escalator, I wanted nothing more than to put on my Mask. To hide this part of me. To mash down anything others might find uncomfortable. To fit in.

After I’m done explaining what happened, Jan looks at me and without missing a beat, she says:

“You were being who you are and that’s all that matters.”

Now, a decade later, I’m sitting at my desk, writing this story, and I’m grateful. Grateful because this little moment, along with hundreds of other little moments, helped me learn to belong.

Or walking into Target and seeing queer people pictured in the signs on the walls.

Or, as frustrating as it can be sometimes, seeing businesses turn rainbow in June.

These moments helped me put the Mask away for good.

To this day, I have no idea what the CIO thought of me that afternoon. But, I understand now that it doesn’t matter.

It’s been a winding, confusing, sometimes heartbreaking journey that’s led me to where I am.

But I wouldn’t change it.

It’s helped me understand why representation matters. Why belonging matters.

And so I’ve decided that my mission, both personally and professionally, is to help create moments for others like Jan created for me.

That’s why I’ve made belonging the centerpiece of my business Courage & Grow.

We’ll work together to create a beautiful, profitable website for your busines, absolutely.

But, in the process, we’ll make damn sure that your customers know that they’re welcome at your business.

That they belong just as they are.

How to brainstorm Brand Adjectives with a mind map

By Anthony Wagner
Infuse your copy, email marketing, web design, etc., with your Core Values by identifying Brand Adjectives. This is a simple exercise that'll show you how.
Read More

How to optimize images for web without losing quality (100% free!)

By Anthony Wagner
If you've heard that you shouldn't upload huge images to your site, you've heard correctly. The issue is: how to optimize images for web without losing quality.
Read More

WFE is a super short, stupid-useful email newsletter that’s got WordPress tips and secrets for Entrepreneurs who want to grow their businesses.

Enter your information below and I'll email the Big Values List right to you!

Enter your information below and I'll email the Essential SiteAudit Worksheet right to you!

This guide contains all of my top tips that I’ve learned over 12 years of building websites for businesses.

It includes my favorite free tools, the best premium plugins, and simple, actionable tips that are broken down into short bullet points.